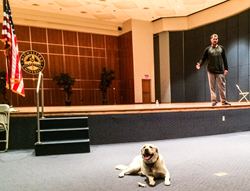 “Cancers that appear in dogs are often genetically identical to cancers that form in humans. Given their compressed life span, dogs can help us determine successful therapies which may take much longer to identify in humans.”

Decorated U.S. Navy SEAL Lone Survivor Marcus Luttrell shared his remarkable story of valor and determination while touching on the unique relationship companion animals have played in his recovery from injuries sustained in combat while speaking to friends of the National Veterinary Cancer Registry on the campus of Midwestern University. Luttrell was speaking as part of a special event hosted by NVCR and Midwestern to highlight the unique connection animals play in human health.

“Riggs is my best friend, he’s my buddy,” Luttrell told a crowd of more than 1,500 gathered to hear his story. Mr. Rigby, a white Labrador service dog, is Luttrell’s constant companion and has provided therapeutic support as the decorated Navy SEAL recovers from wounds he sustained in Afghanistan as part of Operation Red Wings. “We were together before I met my wife, we're that close. I know all his emotions and he knows all of mine.”

Dr. Theresa Fossum, Vice President for Research and Strategic Initiatives at Midwestern University and founder of the National Veterinary Cancer Registry, pointed to service and therapy animals like Mr. Rigby as just one example of the many ways animal and human health are connected.

“Dogs like Mr. Rigby are more than man’s best friend, they hold the promise of helping us understand the genetic basis for complex human diseases, like cancer, diabetes, alzheimers and heart disease,” said Fossum. “Domesticated dogs are excellent models of human disease for numerous reasons. The more than 75 million dogs in the United States can be the basis for epidemiologic studies that may unravel the mysteries of many diseases that plague us now.”

For example, she explained, the cancers that appear in dogs and cats are often genetically identical to cancers that form in humans. Given their compressed life span, dogs are very good models for clinical trials and determining successful therapies which may take much longer to identify in humans.

“If we can cure the cancer in a dog, we can likely cure it in humans,” explained Fossum. “When it comes to therapeutic discoveries, dogs really are man’s best friend.”

Fossum created the National Veterinary Cancer Registry for the purpose of identifying companion animals who are diagnosed with cancer and then pairing those animals with clinical trials.

The NVCR is part of a national move toward One Health -- an initiative dedicated to improving the lives of all species —human and animal — through the integration of human medicine, veterinary medicine and environmental science. More than 700 prominent scientists, physicians and veterinarians worldwide endorse this initiative – including Fossum and Midwestern. Midwestern is opening a new veterinary school this year at its Glendale campus.

This fall, Arizona will open its first veterinary school and admit its first class of veterinary students in August at the Glendale, Arizona campus of Midwestern University. Additionally, Midwestern University is planning an Institute for Healthcare Innovation (IHI) that will serve as a clinical research facility for all MWU healthcare professionals and scientists. The IHI will be located on the Glendale campus and will have the expertise to conduct clinical studies, including clinical trials, in humans and domestic animals. It will serve as a clinical research organization (CRO) for the university and will contain a state-of-the-art Imaging Center. The IHI will conduct clinical studies involving any therapeutic or diagnostic area including, but not limited to, oncology, neuroscience/behavior, and the human-animal bond.

About NCVR:
The National Veterinary Cancer Registry (NVCR) is an animal care database formed to identify and register pets with cancer to facilitate and promote medical treatments that will lead to cures for cancer in pets and people. NVCR will advance medical breakthroughs in both animal and human care, helping to ensure that new treatments available for cancer in humans become available to animals in an efficient and timely manner. NVCR will also advance veterinary cancer research by gathering information from pet owners whose pets have been diagnosed with a naturally occurring cancer. Subsequent enrollment in clinical trials of new drugs and devices to improve the animal’s healthcare may be possible.

About Dr. Theresa Fossum:
Theresa (Terry) W. Fossum was appointed January 2014 as the Vice President of Research and Strategic Initiatives at Midwestern University. She was formerly the Vice Chancellor for Global and Corporate Partnerships for the Texas A&M University System and is a co-founder of Rescue Therapeutics, Inc. (a TAMU spin-out company developing novel therapeutics for cancer and immune-mediated disease). Dr. Fossum is the Chief Scientific Officer for Aviex Technologies, LLC, a One Health company developing novel, cost-effective vaccines to improve human and animal health. Dr. Fossum is the founder and served as Director (2007-2013) and as the Executive Director (2013-2014) of the Texas A&M Institute for Preclinical Studies (TIPS), a 60 million dollar venture at TAMU which promotes public-private partnerships to speed the development of medical devices and drugs. Dr. Fossum’s leadership was integral in conceptualizing and funding the Institute. Dr. Fossum is a world renowned veterinary surgeon and served as the Clinical Director for Cardiothoracic Surgery and Biomedical Devices in the Michael E. DeBakey Institute at TAMU. Dr. Fossum holds an honorary chair from Swansea University in the UK.

Dr. Fossum graduated from Washington State University College of Veterinary Medicine in 1982. After completing an internship at Santa Cruz Veterinary Hospital the following year, she went on to do a surgery residency and Master’s degree at the Ohio State University. She received board certification in Surgery (ACVS) in 1987 and joined the faculty at Texas A&M University later that year. In 1992, she completed a PhD in Veterinary Microbiology. Dr. Fossum has authored or co-authored over 90 manuscripts in referred journals and is the author of Small Animal Surgery, which is in its 4th edition. She was named a Distinguished Alumnus at The Ohio State University in 2007 and received the Texas A&M University System Innovator of the Year Award in 2008. Dr. Fossum sat on the Board of Directors of the National Space Biomedical Research Institute for over 10 years and is the Chair of the Board of Governors for the Foundation for Biomedical Research. Dr. Fossum is a previous recipient of the Wiley Distinguished Professor of Veterinary Medicine Award and the Carl J. Norden Distinguished Teacher Award at Texas A&M University. In 2004, she received the Texas Society for Biomedical Research Award in recognition and appreciation for her many years of dedicated service to the science, research and medical communities in the State of Texas. Dr Fossum, along with Dr. Michael E. DeBakey, founded the CARE Foundation in 2004 in order to provide an infrastructure for veterinary medicine to perform research using animals with naturally occurring disease. She serves as President of the organization and founded the Texas Veterinary Cancer Registry in 2011. In May 2013, the registry went national; National Veterinary Cancer Registry (https://nationalveterinarycancerregistry.org/).